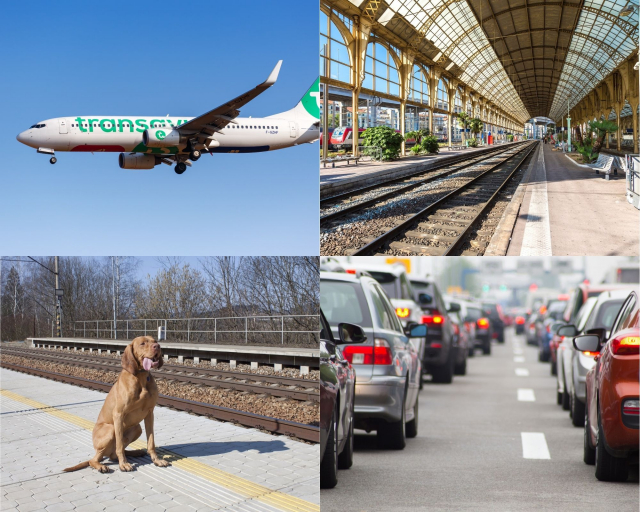 The most important travel rule linked to France this week was the announcement of tighter restrictions on travel between the UK and France from tomorrow December 18.

This means that from midnight tomorrow, only people with an essential reason for traveling will be able to enter France. French nationals and residents of all nationalities are authorized, but not people traveling for tourism, family visits or business trips.

Read more: What counts as ‘essential reasons’ for UK-France travel from Saturday?

However, the combination of Christmas and Covid creates many other travel stories affecting journeys to, from and around France.

Bison FutÃ© recommends that drivers leave the Paris region before 2:00 p.m. today (December 17) to avoid the worst of traffic. In the rest of France, conditions should be normal.

The traffic service also predicts that many people will try to leave the capital on Thursday 23 December, traffic becoming difficult at the end of the morning, especially towards the A6 and A10.

These conditions will last until Christmas Eve, when people are advised to try to get away from the city area by 10:00 a.m.

The day after Christmas, Ile-de-France will be on orange vigilance for traffic leaving the region, in particular towards the Alps and the A6 and A10 motorways.

However, on the weekend of December 31 to January 2, traffic is expected to be lighter than usual.

TGV trains heading south-east of the capital will also be affected by strike action this weekend. SNCF said only one in two trains would run today, but Saturday and Sunday services are expected to be “almost normal”.

Read more: The TGV strike will strike the first weekend of the Christmas holidays in France

Only trains traveling to the south-east, serving cities such as Dijon, Lyon and Marseille, are affected by the strike.

2. British Airways has announced routes in France for its new low-cost subsidiary

British Airways has unveiled the first destinations for its new low-cost Gatwick-based subsidiary, which will launch in March 2022 under the BA banner.

Tickets are now available for flights to 35 short-haul destinations, including Nice and Bordeaux, as well as cities in Italy, Spain, Greece, Croatia and Germany.

BA suspended short-haul flights from London in spring 2020, due to the Covid crisis. Several routes have also been moved to Heathrow during the pandemic, where they will remain, while also being offered at Gatwick in the future.

The French government has announced its intention to increase night train services between 2026 and 2030.

Transport Minister Jean-Baptiste Djebbari declared: “I hope that we will have ten national night train lines by 2030”.

These services would transport passengers from Paris to destinations such as BrianÃ§on, Rodez, Albi, Latour de Carol, Bayonne and Saint-SÃ©bastien (Spain), as well as Metz to Geneva, Nice to Barcelona then Bordeaux and Bordeaux to Nice.

“I want there to be more European night trains,” Djebbari said. â€œMy ambition is to have night trains connecting Paris to European capitals Madrid, Rome, Copenhagen, maybe even Stockholm.

A Paris-Berlin line is expected at the end of 2023, Mr. Castex adding: â€œWe also have a line project linking Strasbourg and Luxembourg to Barcelona, â€‹â€‹passing through Metz, Nancy, Montpellier and Perpignan.

The number of flights carrying passengers across Europe fell dramatically last week due to new restrictions introduced to control the spread of Omicron, according to figures from the air traffic management organization. Eurocontrol Pin up.

In the week to December 11, the only apparently unaffected airline was Ryanair, which increased its number of flights by 5% compared to the same period in 2019, with 2,097 services.

No other company has managed more than 1,000 flights, Air France with 770 (down 28% compared to 2019 figures) and EasyJet and British Airways with 41% and 48% respectively less than two years more early.

This situation worries players in the aviation industry, whose activity had just resumed after months of Covid restrictions.

“We know a lot about this virus and the inability of travel restrictions to control its spread,” said Willie Walsh, chief executive of IATA.

“However, the discovery of the Omicron variant caused instant amnesia among governments that put in place instinctive restrictions in total violation of advice from the World Health Organization.”

WHO says travel restrictions “won’t prevent international spread [of Covid], and will place a huge burden on lives and livelihoods. Additionally, they could negatively impact global health efforts during the pandemic, discouraging countries from reporting and sharing their epidemiological data. ”

The low-cost company Transavia has added two Paris-Orly-Kefalonia and Montpellier-Mykonos connections to its offer.

Transavia will offer a total of 26 routes to Greece next summer, the largest of all French operators. Destinations include Athens, Santorini, Skiathos and Rhodes.

SNCF security agents now have the right to stop and search travelers in certain stations in the Alpes-Maritimes.

This is due to an order signed by the prefect of the department Bernard Gonzalez, in the hope of reducing the risk of “terrorist attacks in public transport”.

Searches can only be carried out “in certain circumstances relating to the existence of serious threats to public security” and must be carried out by an officer “of the same sex as the person in question and with his consent”.

The decree will remain in force until January 2 in Antibes, Cannes, Cagnes-sur-Mer, Menton and the three stations in the city of Nice.

Passengers on trains, buses and trams on the Lyon TCL network will now be permanently authorized to travel with their large or medium-sized dogs.

The admission of large dogs has been experimented for five months in the city area but the change must be maintained from now on.

People who wish to travel with a larger dog must purchase a â€œWafâ€ ticket, which costs â‚¬ 1 for the day, â‚¬ 5 for the week or â‚¬ 10 for the month.

Some 1,300 “Waf” tickets have been used since the start of the experiment and there has been no incident on the network, said Bernard.

8. Air France turns to â€œeco-pilotingâ€ to save energy and reduce emissions

Air France is committed to â€œeco-pilotingâ€ techniques to reduce its emissions and retain the loyalty of passengers who are aware of their carbon footprint.

A study by statistics firm Berger found that even with the end of the Covid pandemic, the number of flights could drop by 20% due to passenger environmental concerns.

Air France is therefore looking for ways to reduce its fuel consumption and CO2 emissions.

“Eco as ‘ecology’ and ‘economy’, which often go hand in hand in the aeronautics industry,” explains Laurent Lafontan, head of development at Air France.

â€œWhen we save fuel, we also reduce CO2 emissions,â€ he added. With this in mind, Air France has put in place tools that allow pilots to monitor their fuel consumption and choose to reduce it by opting for more energy-efficient take-off and landing trajectories.

The use of electronic tablets for â€œeco-pilotingâ€ has also saved the airline 20 million sheets of paper, which in turn are used to lighten the planes.

Of course, to make a really tangible difference in its CO2 emissions, the aviation industry will eventually have to develop new forms of fuel for flights.