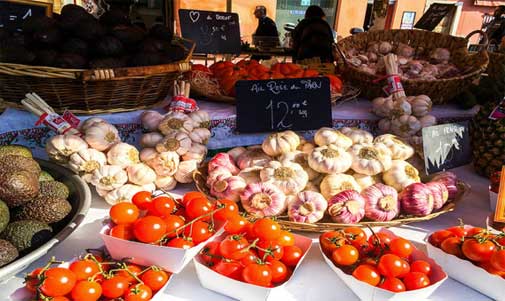 For millions of people around the world, nothing better than French cuisine. Ask French foodies what their favorite dish is and you can expect a tortured monologue that can last for centuries: â€œA juicy duck breast! No, noâ€¦ a simple onion soup! But, oh, but I also like pan-fried foie grasâ€¦ What about cheeses? You can’t make me choose between Ã‰poisses and Brillat-Savarin! Etc.

What makes French cuisine so famous? Is it really so incredibly delicious? In truth, most French food lovers cherish not only the taste of French cuisine, but the culture that embodies it.

In France, food is sacred. When preparing a dish, the freshest, highest-quality ingredients one can afford are chosen. Before anyone eats a bite, the table is carefully set, even if it’s just a simple lunch. During the meal, people put their phones away and no one looks at the time. Eating is a celebration of both the food in front of you and the company around you. It is this respect for food that many lovers of French cuisine appreciate as much as the food itself.

Every French gastronomic journey begins at the market. Most towns and cities have a market at least twice a week, sometimes every day. Small towns and villages have a market once a week. Some of these markets date back several centuries: one, on the Ile de RÃ© in western France, boasts that the market has been around since the 14th century. In Paris, the MarchÃ© des Enfants Rouges dates from 1628.

A good French market has virtually everything you need to prepare the meal of your choice: butchers, fishmongers, cheese vendors, fruit and vegetable producers, producers of local specialties, such as honey or olives.

Of course, people have their favorite markets and their favorite sellers. It is not uncommon to see a long queue, around fifteen people, for a certain cheese maker (cheesemaker), while another cheesemaker at a few stalls only has a few customers. The French take quality very seriously. They carefully review offers and ask questions about their intended purchase before they buy.

For the most part, there is no such thing as a “typical” French meal. Although people often use the general term “French cuisine” to describe French cuisine, most French dishes are regional and therefore vary depending on where you are. The main exception is for breakfast foods.

For breakfast, the French often eat toast: a slice of bread, usually a baguette, topped with a fruity jam. This is sometimes accompanied by yogurt and a croissant, and almost always accompanied by coffee, hot chocolate or orange juice. On weekends it is common to pick up freshly prepared produce pastries from the bakery: croissants, pains au chocolat, raisins and more.

Midday meals vary by region. But one thing that characterizes the French lunch is its length. A few decades ago, lunches were akin to mini-dinners, which lasted for hours and were accompanied by wine. These days, French breakfasts are shorter, but still a leisurely sit-down business that lasts about an hour. Certainly, in some big cities like Paris, a few people can commit the sacrilege of hastily eating a sandwich. But for the majority of French people, lunch is a popular time to take a break from work and socialize with peers and friends over a good meal.

Again, a typical French dinner depends on the region. However, the structure of a basic French dinner tends to be unchanging. A four-course meal is served as follows: Entrance (aperitif), flat (main course), cheese (cheese) and dessert. Sometimes there is also a salad dish, which would follow the main course. If both fish and a meat dish are served, the fish would come before the meat.

Aperitives and digestive usually French bookends dinners. The aperitif comes at the very beginning of the meal. Alcoholic and non-alcoholic drinks are served with small appetizers, such as nuts or olives, to stimulate your appetite. On the other hand, the digestive takes place at the very end of the meal. Customers are served high alcohol drinks, such as whiskey, bourbon or liqueur, to aid digestion.

To really know â€œFrench cuisineâ€, you have to know the regions. Despite the reputation for goodness that many French dishes have, most have humble origins – not created for kings, but for farmers and laborers. The now famous regional specialties were largely based on local produce available at the time. This is why you will find many dishes made with apples and dairy products in Normandy, a hilly region of apple orchards and dairy farms. In Provence, the cuisine emphasizes olive oil which comes from the olive groves of the region.

Let’s take a look at the cuisines of some of France’s most popular food regions.

Lyon, the third largest city in France, is the natural place to begin an examination of French cuisine. The city is so famous for its exceptional cuisine that it is nicknamed “the gastronomic capital of the world”. Home to nearly 2,000 restaurants, Lyon has produced some of France’s most famous and innovative chefs, including the legendary Paul Bocuse, who popularized new kitchen.

Traditional Lyonnaise cuisine is a hearty and sticky dish that should be avoided by vegetarians or anyone who prefers to eat light. Cuisine often includes pork (in all permutations, from snout to toe), chicken and duck (especially livers), and offal from a variety of animals. The adventurous eater will appreciate such dishes as chicken liver salad (salad with pan-fried chicken liver), head of veal (poached calf’s brain), or Lyonnaise tripe (fried tripe with onions and garlic).

The less adventurous among us will fall for the pike quenelles, a delicious fish ball topped with a creamy lobster sauce. Lyonnaise salad (green salad with bacon and poached eggs) is also an excellent choice, as popular as artichoke fund and foie gras (artichoke hearts with foie gras). If you want to look more adventurous than you are, try canut brains. Although this translates to “the brain of the silk worker”, it really is fair. white cheese (the French version of sour cream) with shallots and herbs.

In Lyon, be sure to eat traditional cuisine in a Cork. A stopper is a tavern-style restaurant that once served the silk workers who populated the city in the 16th and 17th centuries. While the city has many excellent caps, the Comptoir Abel has a reputation for being the most authentic – serving meals since 1928.

Unlike the heaviness of Lyon, Provencal cuisine seems light as a feather. Provence is a region in the south of France, known for its lavender fields and olive groves. The cuisine is typically Mediterranean, with lots of fish, vegetables, olive oil, garlic and herbs.

Perhaps the most famous dish in the region is bouillabaisse, a fish stew that comes from Marseille. To come second for the most famous is likely Ratatouille, a vegetable casserole made with tomatoes, zucchini, eggplant, onions, peppers, garlic and a good dose of olive oil. Also popular is little stuffed – assorted vegetables, tomatoes with peppers, stuffed with minced meat. One of the most hearty local dishes is Provencal stew, a beef marinated in red wine with onions, garlic and herbs, and served over pasta.

Even in Provence, the dishes can be reduced to a precise origin. You will often see certain foods labeled “Provencal”, but they are actually Nice-from the city of Nice. Typical examples of Nice food are socca, a chickpea pancake, pissalidiÃ¨re, an onion pie and, of course, a nicoise salad – a salad made mostly of tomatoes, tuna (or anchovies), hard-boiled eggs and onions. Other ingredients, like potatoes or green beans, can also be included, but will inevitably turn some purists upside down.

On the northwest coast of France you will find the regions of Normandy and Brittany. Each has their distinctive dishes, but being so close to the ocean, both are known for their excellent and wide variety of seafood and shellfish. Beyond seafood, you will find a lot of apples in the kitchen and Norman products, such as Chicken VallÃ©e d’Auge, roast chicken with apples, Apple Pie, and Calvados, an apple brandy. Normandy, a dairy country, is also known for its excellent cheeses, especially the famous Camembert.

Brittany stands out the most for its pancakes. Savory pancakes are generally called pancakes. These are made with buckwheat flour and are usually served with eggs, ham, and cheese (although the toppings can cover the full range of ingredients). Sweet pancakes are often brushed with salted caramel or chocolate, or simply sprinkled with butter and sugar.

Other types of regional French cuisine

Writing about all the regional cuisines of France could fill a book. In Burgundy, you have beef bourguignon, a rich beef stew cooked for hours in red wine. From Alsace in eastern France comes cuisine with a distinctly German touch, including sauerkraut (sauerkraut with boiled potatoes and sausage), Flammekueche (a tasty thin pie with cheese, onions and bacon) and bÃ¤ckeoffe (a casserole dish made from assorted meats, potatoes and leeks).

In the southwest, expect a lot of spice from Basque cuisine. The dishes here tend to be embellished with red Espelette peppers. Try the Omelette piperade, a pie-shaped omelet filled with tomatoes, onions, Espelette peppers, olive oil and garlic.

Traditions and Culture in France

Visa information and residence in France