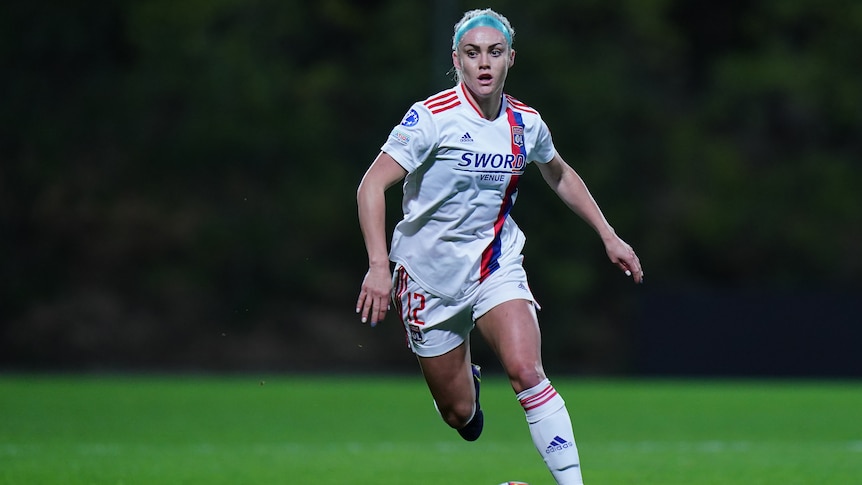 Matildas star Ellie Carpenter is in a race against time to take part in the 2023 Women’s World Cup on home soil after her French club, Olympique Lyonnais, confirmed the defender had ruptured her anterior cruciate ligament (LCA) in the Champions League final.

Carpenter, who started his first European final against Barcelona on Sunday, fell 12 minutes into the game after clumsily pushing off the grass to collect a long pass, immediately grabbing the inside of his left knee.

The 22-year-old was surrounded by her teammates and stretched minutes later in tears.

Lyon confirmed on social media on Tuesday that scans revealed Carpenter had ruptured her ACL, meaning Matilda will be out of action for several months as she undergoes reconstructive surgery this week before beginning the long rehabilitation process.

“Olympique Lyonnais deplores the serious injury of its defender Ellie Carpenter, who left in the 14th minute of play in the Women’s Champions League final against Barcelona (3-1) in Turin,” Lyon said in a statement. on its website.

“Examinations taken by the Australian international have confirmed a rupture of the anterior cruciate ligament of the knee which will lead to an operation this Wednesday in Lyon.

“Olympique Lyonnais would like to give their full support to Ellie Carpenter, author of 29 matches this season and winner of her second Champions League with OL, who should be out of action for at least six months.”

It was an abrupt and premature end to a historic opportunity for Carpenter, who became the first Australian to qualify for two Champions League finals when her side Lyon beat domestic rivals PSG in the two-legged semi-final.

Lyon’s 3-1 victory over Barcelona in this year’s final, which took his own unequaled European record to eight titles, made Carpenter the only Australian to win Europe’s most prestigious competition twice.

While she took her time settling in Lyon after signing for the French giants in 2020, which included a stint on the bench when they won the delayed 2019/20 Champions League final, the defender the Cowra-born has since started in the side, most recently named to the Division 1 Women’s Team of the Season.

She had also cemented her place as one of the Matildas’ most valuable players alongside fellow defender Steph Catley, with the pair often creating the most goalscoring opportunities in their overlapping full-back roles.

Now, just 14 months from the Women’s World Cup, a shadow of doubt has begun to hang over Carpenter’s availability for the home tournament.

While some athletes are able to recover from ACL injuries in less than a year, others can take much longer.

It is the third ACL injury for a Matildas player in the last twelve months after midfielder Chloe Logarzo ruptured hers against the Republic of Ireland in September 2021, followed by young winger Holly McNamara, who tore her second ACL while playing for Melbourne City in the Women’s A-League competition earlier this year.

The injury means Carpenter will miss the Matildas’ friendly window in June, where they will face emerging European heavyweights Spain – many of whom play in the Barcelona team that Lyon beat last weekend – as well as Portugal , which Australia last faced in 2018.