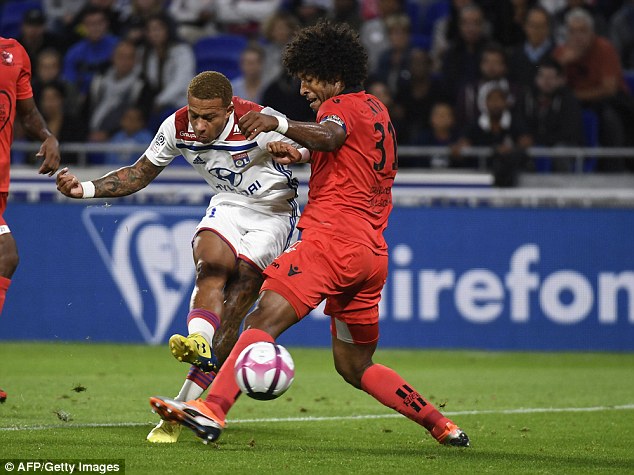 Former Manchester United winger Memphis Depay “had his house broken into during the game against Lyon” and suffers nearly â‚¬ 1.5 million in damages

By Adam Shergold For MailOnline

The home of Dutch winger Memphis Depay was “broken into on Friday night” while playing for Lyon in their Ligue 1 game against Nice.

The damage amounted to around 1.5 million euros (Â£ 1.34 million), according to reports in France, although police have yet to confirm the true value of the stolen goods.

According to L’Obs magazine, the heist happened while Depay was playing for Lyon in their 1-0 loss to Patrick Vieira’s Nice at Groupama Stadium.

Damage to Depay’s property has been estimated at around Â£ 1.3million

The 23-year-old ex-Manchester United winger, who made 39 appearances and scored nine goals for the Netherlands, is not the first France-based top footballer to be targeted by criminals while playing.

Depay is quick to flaunt his wealth on his Instagram account, where he regularly poses with expensive clothes and jewelry, while he also enjoys sports cars.

Nice claimed their first victory of the season thanks to a 50th-minute goal from Allan Saint-Maximin, lifting them to 14th place in the Ligue 1 standings.

Depay has enjoyed much more success with Lyon than his ill-fated stint at Old Trafford.

Purchased by Louis van Gaal from PSV Eindhoven in 2015 for Â£ 25million, he struggled to adapt to English football and was quickly replaced by Van Gaal’s successor Jose Mourinho.

However, he has scored 28 times and provided 26 assists in 73 appearances for Lyon.