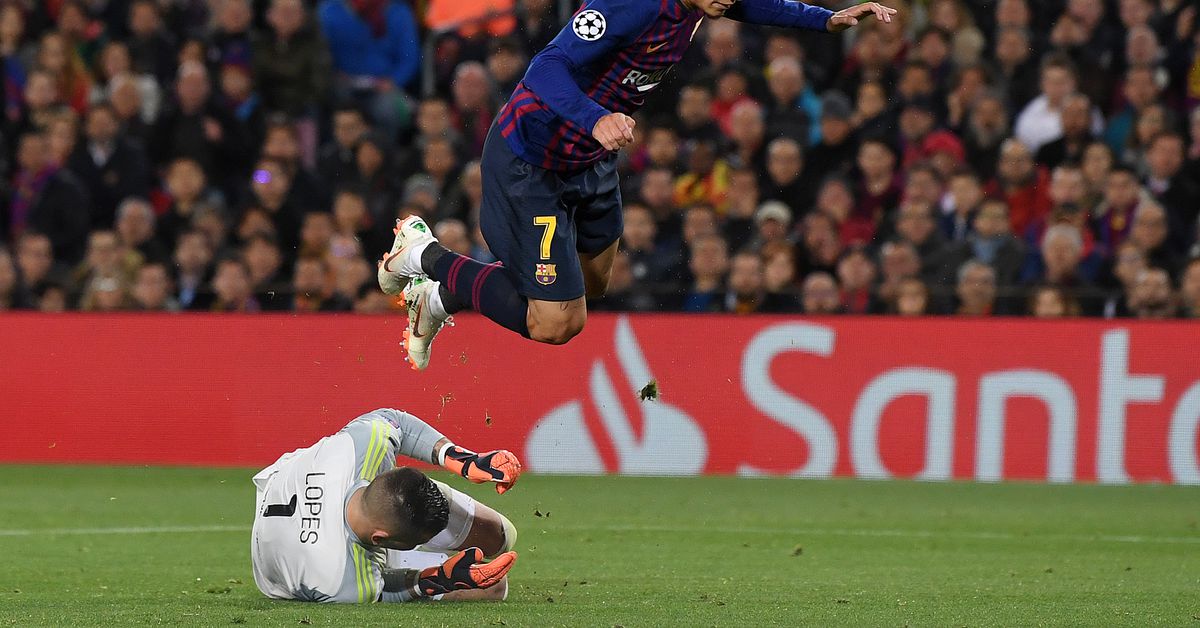 Lyon goalkeeper Anthony Lopes suffered a concussion in Barcelona’s 5-1 win over Olympique Lyonnais yesterday. In the 20th minute of the match, Philippe Coutinho hit the ball from close range. Lopes, diving to challenge, took the full force of the point-blank shot straight to his face. His head and shoulders then hit the ground. He rolled a bit and twisted in pain, before pulling his body aside. Then it looked like he might have lost consciousness temporarily. The referee has correctly stopped the match.

A teammate approached and attempted to wake him up with a light slap. The guardian moved again after a few seconds. His replacement started to warm up. But five minutes after the incident, he was helped to get up. He appeared to tell the doctors on the team not to replace him.

Despite the injury, he was allowed to continue for 9 more minutes. During this time, he made a good save. But cameras saw him struggling to focus and apparently wincing in pain. He was on the verge of tears when he was replaced.

FIFPRO issued a statement of concern regarding the incident. “We fear that while [protection against concussion] The procedures are used successfully in several sports, they have not been adopted by professional football, â€said the organization.

UEFA protocols require the referee to stop play if a head injury is suspected. After that, the team’s medics will assess the player and if they deem him fit to continue, he can stay on the pitch.

However, team doctors are employees of the club and therefore may be in conflict of interest. A team may be interested in erring on the side of not using a replacement if it is not necessary. Teams only have 3 substitutions, and it’s a strategic drawback to use one early in the game for an injury.

A player who has suffered a concussion runs the risk of making the situation seriously worse if they receive another concussion soon after. Lopes threw up and passed out in the locker room after the game, according to OLTV. He also wouldn’t remember telling the doctors he could continue.

His teammates trying to wake him up with a slap on the cheek, while well-meaning, could be risky. Any sudden additional movement of the head could be problematic. Also, not everyone who suffers from a concussion will lose consciousness. And not all concussions come from blows to the head. Sometimes a blow to the shoulder hits the head and causes a concussion.

The commentators of BR live seemed confused as to what happened during the incident. They said Coutinho didn’t catch Lopes with his boot. They didn’t seem to notice that the ball hit his head, or that his head and shoulders hit the grass. Ironically enough, they hypothesized that “Lopes’ brain was working fast” because, in their opinion, he did not have a head injury but grabbed his face for the referee to stop play. with a loose ball near his goal. Even when he was replaced, they wondered if he had been injured in another incident.

This is why many experts have called for changes to the FIFA and UEFA concussion protocol. On the one hand, the substitution rules could be changed. For example, a player suspected of having a concussion could be replaced by a temporary player. The temporary replacement could play for a period of, say, 10 minutes, during which the medical team would have more time to assess the player suspected of having a concussion. After 10 minutes, he becomes a permanent replacement. Otherwise, the original player is allowed to return if allowed to play.

Medics would ideally be neutral, so there would be no pressure from the team to get the player back into action as soon as possible. They would err on the side of caution. They should also have more options to use video replays to help diagnose gamers.

There have been concerns of teams abusing the rules for tactical gain, but that’s a detail to understand. It is worth the risk of any game if we protect the health of the players. A concussion is literally a brain injury, it is something extremely serious. Football should proactively improve protocols before a crisis is discovered. Other sports, like American football, denied the problem was real until they could no longer, as by then so many players had reported adverse effects, including deaths and personality changes. Even the murders have been linked to brain dysfunctions due to repeated brain trauma.

Association football is not as violent as grid football, but the risks are quite serious. Lopes will meet with an expert neurologist tomorrow to help him recover. We hope he will be back in great shape as soon as possible.

The Outer Banks Voice – The next decade of the Soundside event site: what to expect?