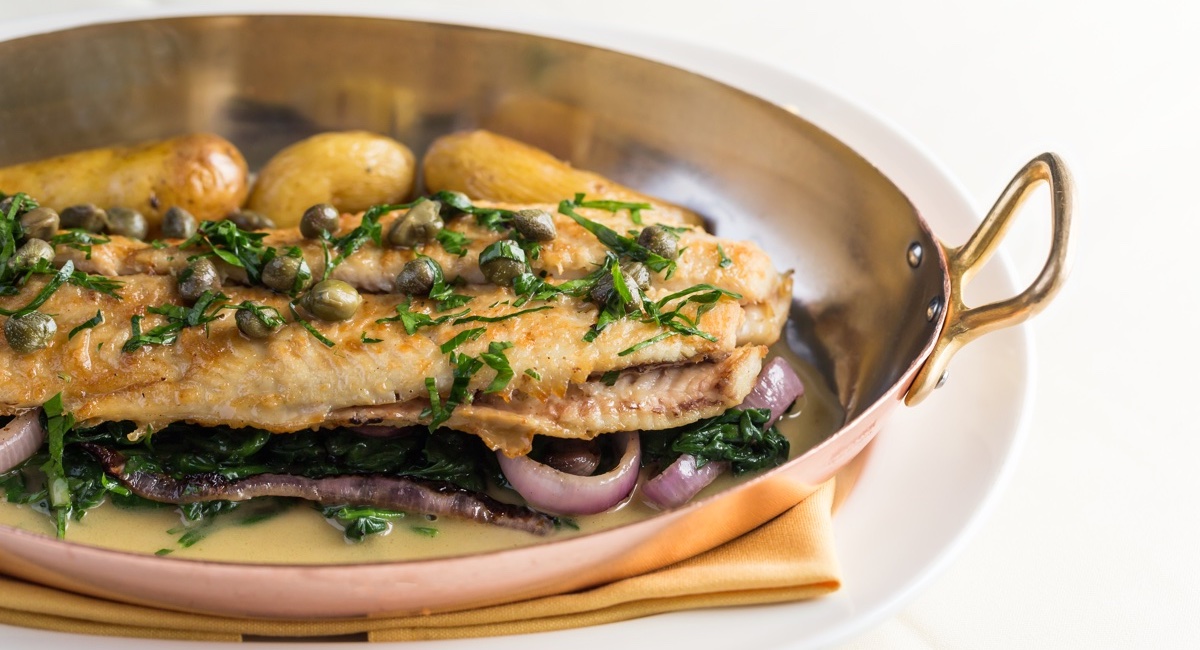 From traditional pillars to naughty little bistros, these are the French places around Boston with that I do not know what.

Foodies and restaurant newbies love The Feed. Sign up now for our bi-weekly newsletter.

French cuisine is known to be difficult to perfect. Fortunately, Boston’s most talented chefs are up to the task. Whether you’re looking for a simple bistro serving coastal classics or a decadent multi-course extravaganza that doesn’t skimp on butter, you’ll find something to appeal to any Francophile here. And unlike your recent frenzy of guilty pleasure Emilie in Paris, these restaurants will not embarrass you in front of your French friends.

This bistro by longtime Boston restaurateur Seth Woods may be named after the region in southwestern France that’s home to the wine mecca, Bordeaux, but Aquitaine is an entirely Parisian bistro. Dim lighting, burgundy booths, tiled floors, and printed crockery of the same name make the South End place quite chic, as does the newly created outdoor patio, where you can nibble on triple cream cheese with a glass of Fronsac. while looking at people under the shade of a striped umbrella. Wherever you settle down, including the Aquitaine suburb of Chestnut Hill, indulge in a hearty meal of duck a l’orange served with mashed parsnips and braised kale. Please, however, avoid the risk of embarrassment: leave the beret at home.

Whether you want to reassure yourself with ton of love in a lavish terracotta cabin or channel your inner Hemingway from the expat era quietly daydreaming at the bar, this Lyon bistro tucked away in the South End has a place for you. Jamie Mammano, the award-winning chef behind Boston staples like Mistral and Moooâ€¦., Wanted to bring a taste of eastern France in the form of a little Cork. He has certainly succeeded: while Bar Lyon is perhaps Mammano’s smallest business, its menu is full of flavors with its duck confit soaked in “broken garlic butter” on a bed of Lyon potatoes or its classic pike quenelle, a delicate pike dumpling swimming in a creamy, velvety lobster base.

The dining room on the second floor of the Bistro du Midi. / Courtesy photo

This Provencal-inspired Back Bay staple perched above the public garden may make you sit a little straighter and check your shirt buttons. Yet with a quick swipe of a silver table piece, the Bistro du Midi gently dispels the haughty stereotypes of French waiters. With their approachable demeanor and eagerness to discuss Chef Robert Sisca’s â€œNew England-inspiredâ€ French seafood dishes, these professionals provide high-quality service to complement the stellar menu. Expect to feast on foie gras and bouillabaisse in the elegant upstairs dining room, or visit the more relaxed downstairs space for lunch on mussels and fries while sipping Sancerre. How is this quote going? Oh yes, they eat clams!

Around the corner of Commonwealth Avenue (just kidding, but imagine for a second) and Mass Avenue is a sleek and modern French restaurant and lounge that draws stylish crowds and even wines and dine on the best chefs in the world. city. Perfect for a fourth or fifth date – you know, when the going gets tough – Deuxave has just the right sultry setting and seasonal dishes to help seal the deal. Things can get a little scorching once the 9am French Onion Soup arrives, but Chef Christopher Coombs knows how to keep things cool with a plate of rhubarb vacherin to end the night.

Come enjoy pancakes and croque monsieurs in the morning, then find yourself sipping an aperitif before a dinner of duck breast at this laid-back South End wine bar. Unsurprisingly, the Parisian-inspired bistro offers a totally French menu with classics such as coq a vin and steak frites. While you might be tempted to find a perch at the glittering white marble bar, aim for a spot in Frenchie’s glass-fronted veranda lit by twinkling bistro lights and pretend you’ve just plucked the rose from your table right in the gardens of your own castle.

Celebrity chef Jacky Robert moved from France to Boston in the 1970s to help his uncle open the late and legendary Maison Robert. Ultimately, however, this pioneer of fusion cuisine and Master chefs of France (MaÃ®tres Chefs de France) inductee spawned his own culinary revolution, first in San Francisco, then back in Boston where he opened several establishments at the Petit Robert Bistro. He has since left those restaurants and you will now find him at Ma Maison, his most traditional and personal dining room. Adorned with silver platters, wine bottles and white tablecloths, the charming charming Beacon Hill is the perfect setting to dine on beef bourguignon, frog legs and other classics.

When it comes to Boston’s iconic restaurant collective, Barbara Lynch, Menton is its crÃ¨me de la crÃ¨me. Named after a quaint French town on the French Riviera near the Italian border, Menton is a love letter for French and Italian cuisines and wines. Chat with the sommelier, make yourself comfortable at one of Menton’s rustic provincial tables, and get ready for a luxurious meal of foie gras and cappelletti topped with A-5 wagyu beef. Or, perhaps, let Lynch, winner of a James Beard Award and Grand Chef Relais & ChÃ¢teaux, whisk you away with her Chef’s Whim menu.

The first, and arguably Jamie Mammano’s most famous production, has been serving one of the best Franco-Mediterranean cuisines in Boston since 1997. The Back Bay-South End border when it opened. Since then, the whole city has exploded, but the Mistral remains in vogue thanks to its delicate balance of flavors. Admire the robust gastric with dried cherries drizzled with pan-seared foie gras or the hot caper and lemon and butter sauce poured over a delicate Dover sole. A single meal can use up a lot of your funds for rainy days, but that’s life.

If you ignore the peek-a-boo sight of the Prudential Center behind the church across the street, you can almost imagine this South End bistro is parked right next to Notre Dame. Le Petit Robert is the perfect place to live your French fantasy – and contemplate which Parisian arrondissement would suit you best – while enjoying a Lyonnaise veal liver garnished with caramelized onions or a mushroom risotto flavored with hazelnut butter sage. The church bells will ring as you raise a glass of Sauvignon Blanc to your adventurous (and very well-fed) alter ego.

A dish of duck in Rochambeau. / Photo courtesy of Rochambeau

You could roll your eyes at the ultra-trendy influencers flocking to this Back Bay spot just to take selfies over a glass of rosÃ©. But try not to blame Rochambeau, which offers – and at a reasonable price – fine French-inspired cuisine served with a side of flash. There is certainly a dashing energy to the place, starting with the Art Nouveau-inspired architecture and the millennial pink mid-century modern chairs. Bring a crowd, pop bubbles, order plenty of appetizers, and dive into Parisian truffle gnocchi and crispy French fries to match.

Troquet to the south

When this cozy Franco-New American bistro moved from its Boylston Street location to a much larger space in the Leather District, Bostonians heaved a collective sigh of relief. Now everyone has the space to lean into a laissez-faire mindset and order as much wine as they want from owner-sommelier Chris Campbell’s award-winning list. Besides the Magnificent beverage options, Troquet on South offers new interpretations of French must-haves with dishes like its trio of melting pork, served with sundried tomato French toast, as well as its Russian-inspired salmon coulibiac. If you want the full royal treatment, opt for Chef Tyler Stout’s four-course tasting menu, which is sure to keep you satisfied.