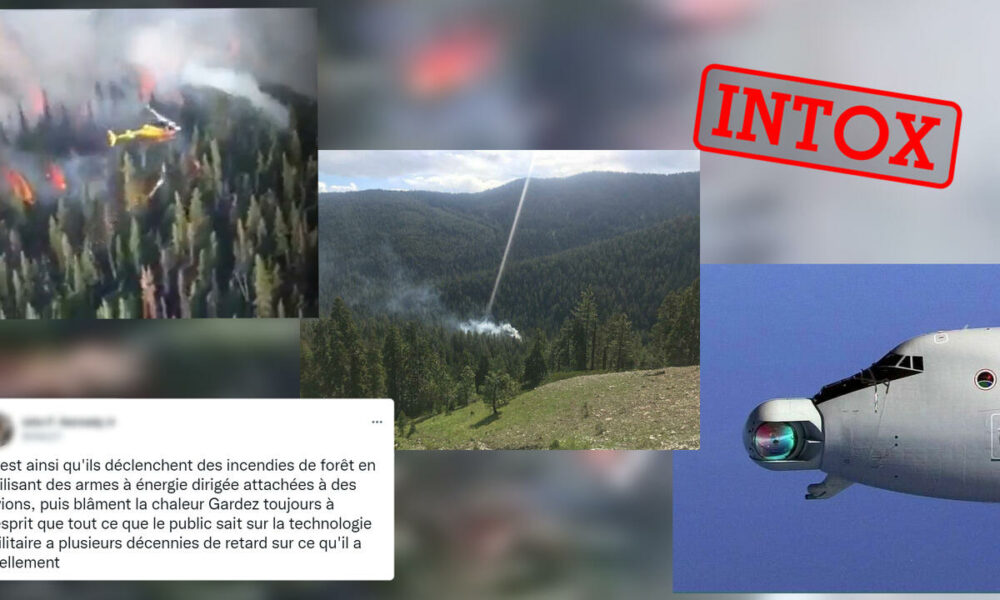 Since early July, fires have been ravaging forests, particularly in France, Spain, Portugal and Morocco. On social networks, accounts claim, with supporting images, that the fires were intentionally caused by planes and helicopters belonging to the military or firefighters. These images were actually taken out of context and shared to relay conspiracy theories.

In the French region of Gironde alone, the fire that broke out on July 12 burned more than 20,000 hectares of forest in one week. Since then, social media users have been sharing impressive images of these wildfires. But between these accounts, some of the images broadcast were taken out of context, fueling conspiracy theories.

A prototype aircraft destroyed in 2012

“They blame heat waves and global warming, but they start these wildfires themselves using energy weaponized aircraft.” Several testimonies express this conspiracy theory, such as this tweet published on July 11: The fires in progress in France, Portugal or Morocco could have been started by military planes.

What do these thousands of shared photos really show? To find out, we did a reverse image search (see how here). This research makes it possible to precisely trace the origin of these photographs of aircraft, for example on this online image bank. And his caption says he was taken to an airport in the West Range, the west coast of the United States, in 2006.

But this plane has nothing to do with a possible fire in the forest. This is the Boeing YAL-1, a prototype developed by the US military from 1992 to 2012 in collaboration with Boeing, Northrop Grumman and Lockheed Martin. The story of this aircraft is told on the Boeing website, but also by specialist aviation media such as Simple Flying.

Designed to intercept missiles using a laser mounted on the front of the plane, this modified Boeing 747 has made several test flights, including on February 12, 2010, as the news agency explains. Reuters. But after the first successful tests, the Boeing YAL-1 failed several missile interception exercises during the months of September and October 2010. Following these failures and the high costs related to the development of this technology, the project was definitively canceled . In 2012, the Boeing YAL-1 was finally moved to the US Army Aircraft Graveyard near the town of Prima, Arizona, where it was destroyed. This plane therefore has nothing to do with the ongoing fire in many countries.

The photograph showing a laser launched by such an aircraft was also taken out of context. This photo has been circulating on social media since at least 2018 and has already been verified by Mick West, an American journalist specializing in fact-checking. In a video posted on August 21, 2018, he explains that what appears to be a beam is actually an optical effect of cleaning the camera lens. In fact, improperly cleaning the lens can leave marks that refract the light picked up by the camera, creating a beam of light like a windshield in the rain.

The theory that forest fires are caused by laser weapons, known as the “DEW theory” for “directed energy weapon”, is not new. Contacted, Mick West explains that he “emerged in the early 2000s, and especially after the attacks of September 11, 2001. Some conspirators then wrongly claimed that the collapse of the twin towers had been caused by laser weapons. was, and the same principle was later applied to forest fires.

On social networks, another video, in which we see helicopters throwing flames in forests, is also shared with conspiracy accounts. According to these publications, these images will prove that forest fires are intentionally started by firefighters armed with helicopters to start fires. In fact, this video was pirated.

To verify this, we performed a reverse image search from this video, which has been viewed nearly 50,000 times. This research refers in particular to an article published by Agence France Presse on August 26, 2019, when the Amazon was devastated by a fire. The article pointed out that the video, then released by users, claiming that the Brazilian government was using incendiary helicopters to set fire to the Amazon rainforest, was a hoax.

Our colleagues from Agence France Presse had traced the origin of these images: they were shot in August 2018 by Canadian firefighters fighting a fire in British Columbia. Crucially, they don’t feature incendiary helicopters, but use a firefighting technique known as “guided burning” or “tactical fire.” Directly, thanks to helicopters equipped with flamethrowers and incendiary pellets, or through ground patrols, the firefighters, here Canadians, set fire to areas of vegetation to stop the progression of the fire or its possible start upstream of this one. destroy by.

If you want to learn more about verifying images, be sure to check out our guide, available here.