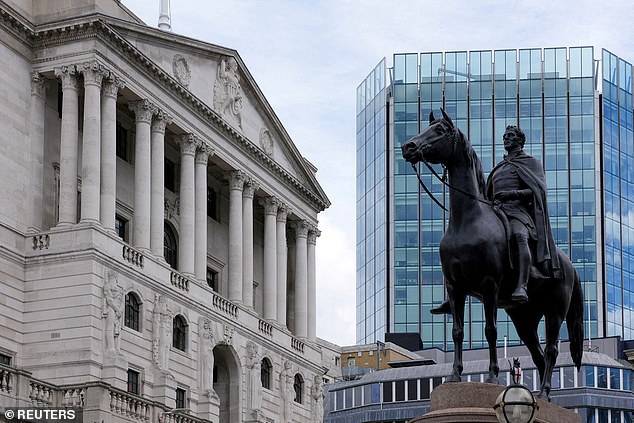 By Lucy White City Correspondent for the Daily Mail

Bank shares fell yesterday amid fears that UK lenders could be hit with additional taxes.

The UK’s biggest banks face a higher corporation tax bill and windfall tax on the interest they earn from deposits stored at the Bank of England.

The prospect of new levies comes as Chancellor Jeremy Hunt tries to claw back £40billion through tax hikes and spending cuts to plug the black hole in the public purse.

His plans have drawn mixed reactions. While some economists believe the additional fees imposed on banks would be relatively painless, compared to drastic government spending cuts or household tax hikes, other analysts said it could make them reluctant to lend and even hurt the UK’s competitiveness.

Gary Greenwood, banking analyst at Shore Capital, said higher bank levies would be “dangerous as it could drive up the cost of capital, which could affect banks’ ability and willingness to lend”.

It could also be more difficult for banks to withdraw much-needed additional cash from investors when the economic downturn causes lending to deteriorate. Currently, banks pay corporation tax of 27% – the standard rate of 19% plus an 8% surcharge introduced following the 2008 financial crisis.

Under Rishi Sunak, who planned to raise corporation tax to 25% next year, the top-up would have fallen to 3%, bringing the overall rate to 28%. Kwasi Kwarteng waived the corporate tax hike and left the surcharge at 8%.

Shares of NatWest and Lloyds fell 2.4% and 4.7% respectively

But Hunt reinstated the corporate tax hike and did nothing to reduce the surtax, meaning banks could face a total tax bill of 33%. Treasury officials said Hunt has yet to make a decision, but is expected to have an answer for the banks in his “fiscal plan” by the end of the month.

The exceptional tax is more complex. Lenders hold reserves at the Bank of England – and that sum has increased due to its note-printing scheme, designed to inject cash into the economy during the pandemic. Initially, these reserves brought in little, but now, as the Bank has raised interest rates to fight inflation, they are paid out around £10bn a year.

The Treasury is supposed to target these payments. Julian Jessop, an economist who advised Prime Minister Liz Truss, said: ‘Banks would hate it, but I would support not paying interest on any or all central bank reserves.

Some links in this article may be affiliate links. If you click on it, we may earn a small commission. This helps us fund This Is Money and keep it free to use. We do not write articles to promote products. We do not allow any business relationship to affect our editorial independence.