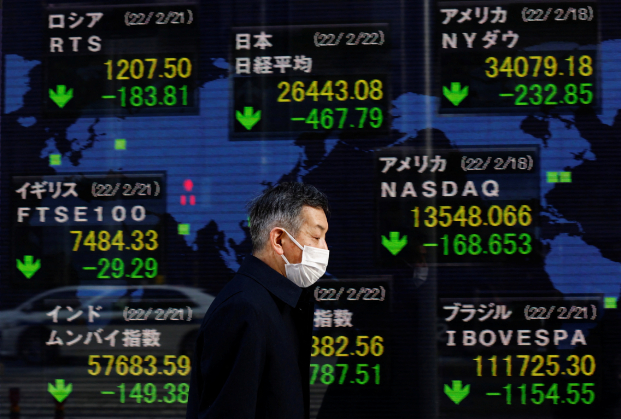 Asian stocks rallied on Monday, encouraged by weaker expectations for US rate hikes despite the bleak economic outlook.

Shares of financial companies and property developers led the gains as regulators stepped up efforts to encourage lenders to lend to qualified property projects following a widening boycott of mortgage payments on unfinished houses.

Sentiment was also bolstered by the country’s central bank governor who pledged to increase the implementation of prudent monetary policy to support the real economy.

Hong Kong-listed tech giants gained 2.7% in early trading, with food delivery giant Meituan up 6.8% at lunchtime as stocks in the territory scored their biggest gain as a percentage in six weeks.

Japanese markets were closed for a public holiday, but shares in South Korea soared 1.8% to lead gains across Asia as currencies and stocks were boosted after investors canceled betting on a bigger interest rate hike by the US central bank this month.

Globally, equities, US futures, oil prices and bond yields all rose, with European stocks starting the week up more than 1% and the euro moving away from parity at $1.0138 with a big week ahead.

The European Central Bank is expected to raise rates for the first time in more than a decade on Thursday, the same day the bloc hopes Russia will resume gas supplies.

US equity futures rose more than 1% at the start of trading in London.

Corporate earnings will be in focus this week with Goldman Sachs, Bank of America, International Business Corp, Netflix, Tesla and Twitter due to report.

Of the 35 S&P 500 companies that reported, 80% beat Street’s expectations, according to Refinitiv. Analysts now expect overall profit growth of 5.6% year-on-year in the second quarter, down from 6.8% at the start of the quarter.

Oil prices rose in the wave of risk. President Joe Biden continued his trip to the Middle East in hopes of securing a deal on increased production, apparently having returned from Saudi Arabia empty-handed.

Sean O’Meara is an editor at Asia Financial. He has been a newspaper man for over 30 years, working for local, regional and national titles in the UK as a writer, sub-editor, page designer and print editor. Passionate about football, cricket and rugby, he is particularly interested in the financing of sport.