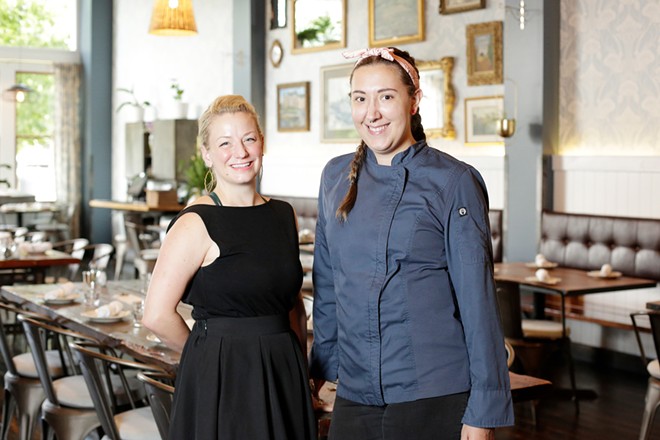 JI do not know what is a French term that is, something attractive that cannot be described in mere words; it’s visceral. In contemporary catering, we can feel this reaction through the food, the dining experience itself, or both. At Spokane’s Française Restaurant, we found this French-inspired shimmer featured throughout.

The entrance to a restaurant, for example, is not something you would expect to see ooh-la-la. Still, you could French-style as you open the door and peruse an artful assortment of live plants in brass and white ceramic pots, some hanging, and all thriving in the light-flooded vestibule.

Functionally, greenery defines the space and directs guests to the docking station. This also provides a nice view while you dine, framing the entry and exit of other guests. Viscerally, however, plants simply feel good…Those living, vibrant beings that are also welcoming and familiar.

That’s by design, says Adam Hegsted, a chef, entrepreneur and leader in the region’s culinary industry, whose company Eat Good Group developed La Française this spring and opened it in June.

“We want to make it look like it’s been there for 100 years,” Hegsted says, noting that the restaurant’s decor deliberately includes “things you might have in your home or feel familiar.”

The building that houses La Francaise is actually 112 years old, the last 10 of which belonged to the recently closed Casper Fry Southern restaurant, with a distinct aesthetic that includes exposed brick walls, dark wood flooring and 13-foot ceilings.

It pleased the Eat Good team, says Hegsted, who worked with Eat Good’s head chef and COO, Aaron Fish, as well as the Frenchwoman’s general manager, Nicole Bronkema, to implement value the patina of the place. They kept Casper Fry’s rough-plank tables with industrial metal bases and the austere bar at the back of the restaurant, but incorporated a soothing blue-gray color palette, eclectic artwork and touches soft as linen curtains.

Française commissioned an Eiffel Tower mural from northern Idaho-based artist Alexandra Iosub for the long, narrow space’s brick wall. The opposite wall has been covered in a muted blue and cream floral art nouveau wallpaper. On it hang the beginnings of a “gallery” of gilt-framed mirrors of various sizes and prints of French art.

“Basically, I just buy a bunch of stuff, and then everyone’s like, ‘This looks really ugly,'” says Hegsted, who considered graphic design in high school before committing. in the culinary industry.

Even though Hegsted laughs describing this process, it works. Plants, curtains, industrial furniture and other decor combine to create a distinct ambiance, both familiar and unexpected, inside the Frenchwoman.

Hegsted often takes a similar approach to menu planning, with its contemporary or culturally-inspired twist on familiar comfort foods.

Dishes on the Française menu, which lists both French and English titles, feature French classics like country pasta or country pâté ($8) served with old-fashioned mustard, gherkin and walnuts, and duck confit with orange or stewed duck with orange sauce ($22).

For a comforting meal, opt for gnocchi with truffle cheese sauce and sautéed mushrooms ($14). Or, for a lighter meal, order the Lyonnaise salad ($11) with frisée, escarole, crispy pork belly and poached egg, or the charcuterie ($22) with a cocktail like the boulevardier ($13).

For dessert, try the donuts ($8) or the luxurious strawberry and rhubarb custard ($8) called strawberry cream jar.

“There are some things we’ve tried and we know it works,” says Hegsted, who thinks he and Fish wrote about 50 recipes for Française. “And there are a lot of things we don’t know.”

Vegetarian and gluten-free nut pie ($11) may not be a bestseller, Hegsted says, even though it tastes like conventional liver pie. So they can say bye to the pâté or any of the roughly 30 other items on the menu, which continues to evolve, Hegsted says.

Fla rançaise is still in its soft-opening phase, having made its public debut in mid-June. Soon, customers will be able to seek out Chef Kayleigh Wytcherley (formerly of Bark, A Rescue Pub and Craft & Gather) to put her stamp on the menu, including adding lunch, brunch and seasonal items.

For now, however, Wytcherley is focused on making sure “everything goes as perfectly as possible,” she says.

“One of the great things about working with Adam is that he really allows his chefs and managers to get a bit invested in their restaurants,” adds Bronkema, who came out of semi-retirement when she heard that Eat Good was doing a French-inspired restaurant. . “So it really becomes a collaboration as you create the space and see it evolve.”

Building a strong team is important to the Eat Good Group philosophy, adds Fish, who oversees back-end operations like hiring.

“I felt like Kayleigh was the most genuine person out of the group of people we interviewed,” Fish said. “She had the skills, drive and experience to build and sustain teams.”

His team is pumped, says Wytcherley.

“I don’t think I’ve ever had a staff as enthusiastic about being at work as mine,” she says.

That’s what they’re looking for, Fish says — a culture where employees love coming to work and want to have a long-term career in an admittedly tough industry.

“I think that’s kind of our philosophy,” Fish says, “and it comes from the top.” ♦

Turnkey Lender Raises $10M, Appoints Chairman of the Board