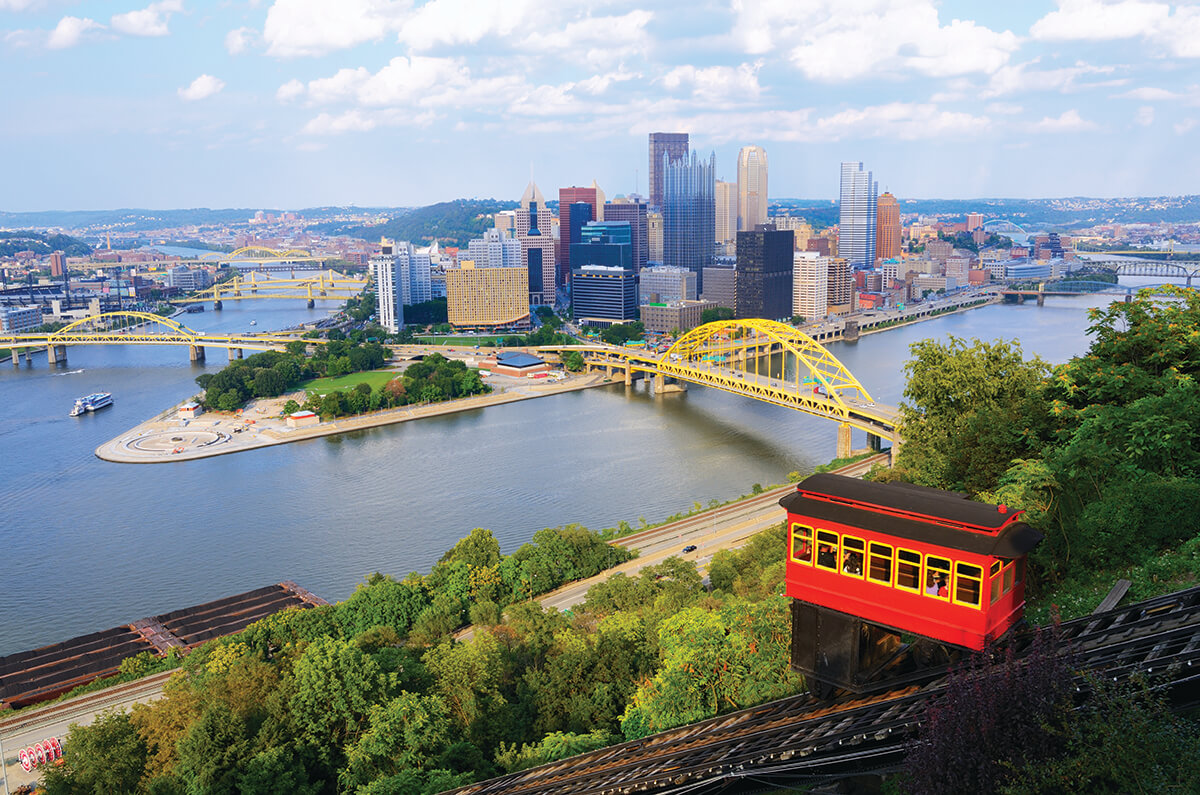 There’s the entrance and living room of Mister Rogers’ house, the great oak tree where Henrietta Pussycat and X the Owl resided, King Friday XIII’s castle, McFeely’s “Speedy Delivery” tricycle, the bench on which Mister Rogers sat during every show, and, of course, his iconic cardigan. We also visited the Bronze sculpture of Monsieur Rogers who resides along the North Shore (near the stadium). Officially called “Tribute to Children”, it stands over 10 feet tall and shows the beloved figure tying his shoes as he would at the start of each episode while singing “Won’t You Be My Neighbor”.

It is better to wait for a nice clear day, as we did, to visit the Duquesne Slope, a funicular located near the south side of Pittsburgh. (A funicular is a cable railway, usually on a mountainside, in which the ascending and descending cars are counterbalanced.) This one, which climbs Mount Washington, was designed by Hungarian-American engineer Samuel Diescher and completed in 1877. The bright red Duquesne Incline, one of the few remaining in the country, was lovingly restored by locals in 1963 and retains its wooden cable car appearance with elegant tin ceilings and stunning views on the roofs of the city. One thing to remember: make sure you have the exact price on arrival. There are no changes, no online reservations and no credit or debit cards accepted.

From the top of Mount Washington, you have a magnificent view of the Three sisters self-anchored suspension bridges spanning the Allegheny River at 6th, 7th, and 9th Streets. The bridges have been given official names to honor important Pittsburgh residents: Roberto Clemente, Andy Warhol and Rachel Carson. Designed by the Allegheny County Department of Public Works, they were all built by the American Bridge Company from 1924 to 1928. The Three Sisters are the only trio of nearly identical bridges, as well as the first self-anchored suspension spans , built in the United States.

In 2001, when the downtown bridges needed maintenance, the Pittsburgh History & Landmarks Foundation suggested a new color instead of the standard Aztec Gold, according to the Pittsburgh City Paper. Among the colors on offer were Perfect Peach and Purple Ice. “Not everyone was happy with the proposals,” wrote Chris Potter. “Tom Sokolowski, who as head of the Andy Warhol Museum is sort of the city-planning equivalent of Joan Rivers at the Oscars, complained that bridges ‘aren’t bath towels’. What if Arthur Ziegler of PH&LF was so interested in redecorating, Sokolowski reportedly said in The Post-Gazette‘Why isn’t he going to work for IKEA?’ The bridges remain Aztec Gold.

“FURTHERMORE, HOW CAN A CITY THAT CLAIMS OWNERSHIP OF KETCHUP AND MR. ROGERS BE BAD?”

We spent our last day in Pittsburgh visiting the mattress factory, a contemporary art museum in the city’s Northside neighborhood. In 1975, artist and Mattress Factory founder Barbara Luderowski purchased a former Stearns & Foster mattress warehouse, hence its name. The museum now includes several buildings around the neighborhood and a garden plot where we met a very friendly cat. Favorite installations included Yayoi Kusama’s Infinity Dots Mirrored Room and Jennifer Angus’ “The Museum of All Things,” an entire room devoted to Victorian furniture, taxidermy and insects.

If you look up from just about anywhere in the city, you’ll see the University of Pittsburgh Cathedral of Learning. Tucked inside is the Nationality Rooms, a group of 31 classrooms representing and offered by the national and ethnic groups that contributed to the construction of the city. Other places not to be missed include the beautiful artistic tribute in front of the Congregation of the Tree of Life, where 11 people were murdered inside their synagogue in October 2018. A total of 101 submitted artworks from around the world were chosen to appear on the one block canvas. There is also the Carnegie Museum of Art, with its impressive Hall of Architecture; the Carnegie Museum of Natural History, which includes the world’s first specimen of a Tyrannosaurus Rex; and the Carnegie Science Center, with its four levels of interactive exhibits and an impressive planetarium show. Also, don’t miss the Phipps Conservatory and Botanical Gardens, a beautiful botanical garden in Schenley Park; the National aviary, the largest aviary in the country with more than 500 different types of birds; and Point State Park, a 36-acre downtown park with great views.