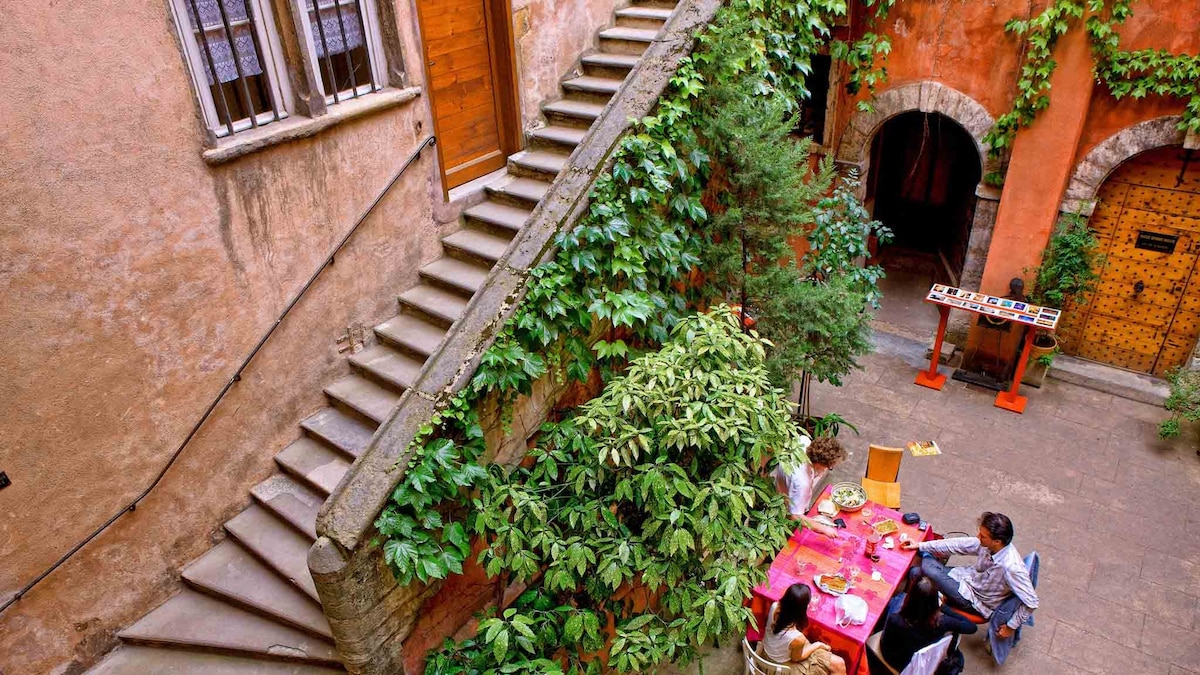 Nestled between the streets of Lyon’s old town and its Croix-Rousse district, the trabouleâ€”A vast network of about 400 hidden corridors, passages and stairwells â€” have testified to historical moments, from the silk trade to the meetings of the French Resistance during World War II.

The guide-lecturer VÃ©ronique Destombes has lived in the city for over 30 years and knows where to tap into the discreet doors, climb the stairs, and venture into the subtly marked traboules to explore the 50 routes still open to the public. Each route has its own pastel color and unique architectural element, such as towering staircases, vaulted ceilings, or detailed Renaissance arches.

Walking along the rue du Boeuf, Destombes weaves the stories of the canuts, or silk workers from Lyon, used traboules to transport fabrics through the city in complete safety, avoiding rain and dirt. In the 1800s, the traboules played a key role in the Canute Revolts, one of the first documented uprisings of the European Industrial Revolution. The exploited silk workers used the gateways to sneak into the city center and take control of the city. During World War II, the French Resistance used the network to escape the Nazis. Runners sneaked through underground passages to avoid being captured and could use the lane double doors to share important messages without suspicion.

In love with Lyon? This neighboring region could be your next travel obsession.

Most of the traboules are now on private property, used only by residents. In the 1990s, the elected officials of the city of Lyon agreed to take charge of the maintenance and restoration of the traboules that the inhabitants keep open to the public from morning to night.

Where to find traboules

With a little detective work, savvy travelers can find their own moments of calm in the traboules dotted around the city. In Vieux-Lyon, the entrances are marked with bronze shield-shaped plaques, while in Croix-Rousse, a lion’s head on a blue marker guides the way. Here are four traboules that are worth looking for.

Traboule of the Court of the Voraces

Sanctuary of the silk workers during the revolts of the Canute, the Traboule of the Cour des Voraces preserves the history of the Canute with its famous six-storey staircase facade, one of the oldest in the city, and a memorial that says: â€œIn the Court of the Voraces, a hive of the silk industry, the canuts fought for their living conditions and their dignity. The historic passage begins at 9 Place Colbert and 14 bis MontÃ©e Saint-SÃ©bastien.

Thank you for respecting copyrights. Unauthorized use is prohibited.

At 54 rue Saint-Jean, look for the green door and an engraving indicating â€œLa Longue Trabouleâ€ to find the longest traboule in Vieux Lyon. Extending to 27 rue du BÅ“uf, the footbridge crosses five courtyards and tunnels under four buildings. It is one of the few traboules still used daily by locals to navigate Old Lyon.

Traboule of the Pink Tower

Enter at 16 rue du BÅ“uf to discover a rose-tinted watchtower, embellished with a spiral staircase, as you walk through the Traboule de la Tour Rose. The stairs are closed to the public, but the delicate colors of the courtyard and the Renaissance-style windows of the tower create a picturesque scene.

Linking 10 Rue Rivet to 5 Place Rouville and 12 Rue Rivet to 6 Place Rouville, this traboule leads travelers to Maison Brunet, a structure built with references to eras: 365 windows (days in the year), 52 apartments (weeks in per year), seven floors (days per week) and four entrances (seasons per year). During the Canuts revolt, soldiers used the many windows to throw fireballs at the National Guard.