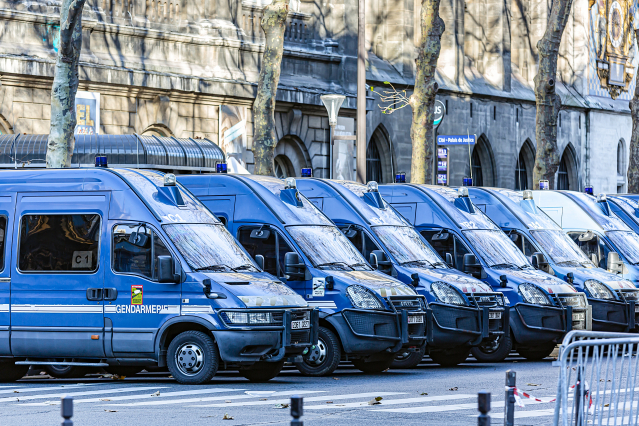 Parisian police are ready to confront any “freedom convoys” arriving in the capital this weekend as hundreds of people continue their journey to block the roads despite the authorities banning the movement.

Truck drivers and other supporters started their journey to Paris this week.

Social media pages suggest major lockdowns are coming from regions and cities such as Normandy, Pas-de-Calais, Nice, Bayonne, Lyon and Perpignan, all planning to arrive in the capital by tomorrow (Saturday 12 February).

A few compliments to the President of the Republic. #ConvoidelaLiberte pic.twitter.com/zVHmECu3AR

the #ConvoidelaLiberte du Sud-Est leaves Bron (in the Lyon suburbs) in the rain and the horns @RMCinfo pic.twitter.com/gWKj0jLzIs

A map of the main convoy routes, departure points and night stops, has been compiled by the Convois France convoy website.

The demonstrators were inspired by the actions of truck drivers in Ottawa, Canada, where for weeks roads were blocked with vehicles and tents to protest anti-Covid measures, paralyzing the city center and forcing the mayor to declare a state of emergency.

But today (February 11) police told AFP they were ready to meet the convoy, with more than 7,200 police and gendarmes ready for the weekend.

A police source said, “If the roads are blocked, we will act ruthlessly.”

In a press release, she also recalled that “blocking a public road” is punishable by penalties of up to two years in prison and a fine of €4,500, as well as the confiscation of your vehicle and your driving licence.

Convoys of vehicles in Paris: the Prefect of Police issues a prohibition order.
Read our press release pic.twitter.com/8Jq1r2SIYj

The official Prefecture of Police Twitter account said: “Special forces consisting of police officers from the Prefecture of Police, mobile force units and moving vehicles have been given firm instructions and will be able to intervene in the event of an attempt to blockage of the road.”

The account then shared photos of its “special engines” as well as “anti-blockade tractors”.

#Expression | Engaged in support of the mobile forces, special machines employed by the @prefpolice will be deployed to #Paris :
Anti-barricade tractors pic.twitter.com/NT7kJ2M7Cg

The Minister of the Interior, Gérald Darmanin, said he was in favor of the right to demonstrate, but only “within a legal framework accepted by all”.

He told LCI: “If people want to protest normally, they can…[but] if they want to block traffic, we will intervene.

But one protester, Adrien Wonner, 27, from Normandy, told AFP: “We’ve been organizing this for quite a long time. We arrive at the capital at all costs.

Inspired by truckers in Canada, the movement in France also grew in much the same way as the yellow vest protests of 2018 and 2019, and relied heavily on social media, including Facebook and the crypto messaging service Telegram.

One protester, Amaury Martelet, said FranceInfo earlier this week that the “freedom convoy” is about “reclaiming our freedom, which has been limited by the current government”, especially with regard to “the compulsory pass for vaccines, which restricts freedom and is not a sign of a good democracy”.

Other protesters have insisted that the movement is not a protest against Covid vaccines but against the constraints imposed on unvaccinated people.

One, by the name of Marc, said: “Recently, I have been demonstrating against the vaccination pass in Lyon. It’s a measure that I don’t understand, but I say this as someone who has received three doses of the vaccine.

Comparisons to yellow vests have been drawn because drivers are also protesting sharp fuel price hikes and increases in French road toll rates, which came into effect this month.